Updated / Aug. 2, 2016 10:40
There are moments of terrible sadness in 66 Days, Brendan J Byrne’s profoundly moving account of Bobby Sands’ hunger strike in the so-called H Blocks of Long Kesh prison. The film alternates between an uneasy sense of futility and the spiritual triumph granted in part by by hindsight, the triumph that appears to trump the relentless despair. 66 Days incorporates the stories of Sands’ nine comrades who also died in 1981, after hunger strikes which had lasted 217 days. Seven of the dead were members of the Provisional IRA and three were Irish National liberation Army (INLA) activists.

Sands died on May 5 1981, at the age of 27, after refusing food for the 66 days of the title.He spent 48 hours in a coma before being pronounced dead by medical staff at Long Kesh. `I’ll have a great feed up there,’ the young Belfast-man wrote in his diary, Writings from Prison, referring to his next life in Heaven.

Owen Carron, Bobby Sand’s election agent, would become MP for Fermanagh and South Tyrone (1981-1983) in succession to Sands. A tearful Carron recalls his last meeting with the hunger striker, as Sands told him that he would hang in there, clearly not wanting to upset him, when both knew his life was almost over. He spent his last days on a water bed to protect his fragile bones and could not be touched by visitors. Sands’ parents, brother and sister were at his bedside when he passed away.

The documentary, which is released in the 35th anniversary year of the Hunger Strikes, opens with powerful contemporary images of a pipe band in slow motion, processing with baleful majesty through a street. As well as such striking imagery, 66 Days is frequently poignant with restrained touches of visual poetry, as in the repeated motif of Bobby Sands as a young boy. These scenes are interpreted by a young actor crouching amidst high reeds, spotting birds above Belfast Lough. Sands’ prison diary mentions the lonely song of the curlew, the birds that break his heart as he identifies their calls.

Bobby Sands joined the Provisional IRA at the age of 18 in 1972. In the so-called H Blocks where he was incarcerated, he would tell long, vivid stories after lights out. The expressive, colourful raconteur – described as `a nice guy’ by one contributor -  would have his listeners spell-bound. One of his stories concerned a young man who refused to fight in Vietnam, riding away from home instead on a Harley Davidson to escape the draft. “We were all on that Harley, “ says a former fellow prisoner, recalling how enraptured he and all of his comrades had been by Sands’ story. 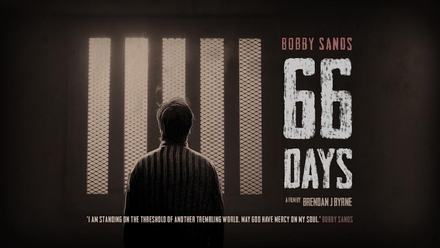 There were so many political prisoners at Long Kesh that they effectively comprised an army that could not be dislodged. The crunch issue was so-called `Special Category Status.’  Special Category Status had been withdrawn from Republican prisoners by the Labour government prior to Margaret Thatcher’s appointment as Conservative Prime Minister in 1979. Mrs Thatcher would continue to deny the prisoners Special Category Status, which included the right to wear their own clothes, access to free association time, to visits and mail. Further demands included the return of lost remission time and the right to refuse penal work. The scene was set for a period of harrowing conflict which led insidiously towards a period of some months which traumatised the entire island of Ireland.

The hunger strike as weapon, its potency as a sensational act of defiance, is explored in 66 Days. The Sinn Féin Lord Mayor of Cork, Terence MacSwiney died in October 1920 after 74 days hunger strike, having chosen to reject food due in part to guilt about not having taken part in the Easter Rising. Similarly, Bobby Sands believed that his own self-inflicted suffering would have much more effect than any suffering that he could inflict on others by violent acts. 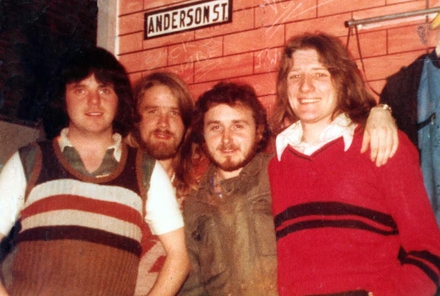 Bobby Sands (on the right) pictured with a group of friends.

There is gripping footage of Sands’ election as MP for Fermanagh and South Tyrone, while in prison. Sands’ mother fervently requests that there be no violence on the back of the win, subtitled on a contemporary French-language news report, a measure of how the story caught the the world’s imagination, not just in France, Europe and the USA, but incities like Tehran and Moscow where, in certain circles, he was regarded as a hero and continues to be so regarded.

On October 3 1981, the remaining hunger strikers ended their protest. The Northern Ireland secretary James Prior announced three days afterwards that prisoners in the Maze had the right to wear their own clothes and the restoration of 50 per cent of lost remission for those who obeyed prison rules for a three-month period. The Sound of Unheard Suffering – an Interview with Jean-Marc Mahy

'Bobby Sands 66 Days, a new film on the hungerstrike of Bobby Sands and his 9 comrades' have no comments