Immigration centre staff told: Put ‘disobedient’ detainees in solitary confinement – even if it could kill them

People held at Britain’s immigration removal centres can be thrown into solitary confinement against medical advice and held for hours without any explanation, according to new guidance set to be issued to guards by the Home Office.

A draft “detention services order”, spelling out guidance to staff at the immigration prisons on the use of solitary confinement, says the sanction can be applied even if medical advice explicitly warns that it would be “life-threatening”.

The practice, described by campaigners as “cruel”, can also be handed out by guards to anyone who is judged to be “stubborn” or “disobedient” – despite concerns by official watchdogs that vulnerable people with mental health problems are being being seriously affected.

Tens of thousands of would-be migrants to Britain are locked up in prison-style immigration removal centres every year. Not all people in the centres are destined for deportation: while some are waiting to be removed, large numbers are simply waiting for their asylum application to be processed or to have their rights to remain in the UK determined. These detainees are not being held in the centres as part of any sentence – but are made to live in them for the administrative convenience of the authorities.

The new draft document, “Removal from Association (DC Rule 40) and Temporary Confinement (DC Rule 42)” advises staff that anyone who is being “stubborn, unmanageable or disobedient” may be thrown into solitary confinement, described euphemistically in the rules as “rule 40 or rule 42 accommodation”. It further advises staff that they can wait up to two hours before telling a person why they have been detained in such a way. Staff on location can authorise solitary confinement for up to two weeks; area managers only have to be consulted for longer detainments. 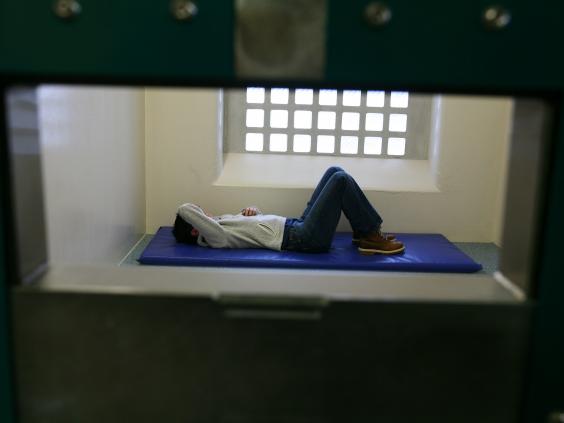 The new draft document advises staff that anyone who is being ‘stubborn, unmanageable or disobedient’ may be thrown into solitary confinement (Rex)

Staff at the centres are also effectively given the go-ahead to disregard medical advice that solitary confinement could kill a particular detainee if they think they have a good reason for doing so. “When medical advice is given that locating the detainee in [solitary confinement] would be seriously detrimental to a detainee’s health or is life threatening, the multidisciplinary team should urgently consider this advice,” it says. The document however continues, stating that the medical advice may then be ignored as long as a note in made in a booklet “clearly stating the rationale”.

There is no prohibition in the draft guidelines on detaining people with mental health problems in such a way. The document is the first time a detention services order has issued advice about solitary confinement. Sara Ogilvie, policy officer at the campaign group Liberty, told The Independent that the Government was putting the health of detainees in danger and failing to afford them “basic dignity”.

“Limitless immigration detention is a dark stain on our country’s human rights record. Adding the cruel practice of solitary confinement to the mix is a grave injustice which risks causing serious harm to innocent and vulnerable individuals,” she said. “But instead of abolishing this inhumane system, the Home Office’s latest order would compound the problem by authorising the segregation of those who are deemed stubborn or suffer mental health problems, even where confinement may be life-threatening.” Ms Ogilvie admonished the Government, saying it “should be ashamed at its failure to afford even the most basic dignity and security to those within its care”.

Earlier this year the independent monitoring board of Heathrow Immigration Removal Centres – formerly Harmondsworth and Colnbrook centres – criticised practices regarding solitary confinement there.

Case studies provided in the board’s report from 2015 include a person with “schizophrenic and bi-polar conditions” who was detained for a 54-day stint in solitary confinement, as well as a detainee with “serious mental health issues” who was confined for 39 days before being sectioned under the Mental Health Act. The board said solitary confinement was used against detainees “unable to integrate onto the normal regime, including individuals with serious mental health issues”.

“They are vulnerable and confinement is not a humane way to address the problems they experience,” it concluded.

Ministers caused controversy last month after The Independent reported that families with children would be moved back into such prison-style immigration detention centres, albeit in a “discrete” unit from other detainees. The move was decried by campaigners as effectively reversing the 2010 Coalition government’s pledge to end child detention in the immigration system.

A spokesperson for the Home Office told the Independent that it would take criticism into account when finalising the draft order.

“It is important that maintaining safety and security of the detention facility is balanced against showing due regard for the dignity and welfare of the detainees,” she said.

“Detainees are only separated from others in exceptional circumstances. This is done for reasons of safety, either their own or for others, for security reasons or when an individual is being violent. Temporary confinement is never used as a punishment.” Towards European mini-Guantanamos : “prisons within the prisons for dangerous Islamist prisoners” (See article in The Guardian 13 July 2016)

'“Removal from Association (DC Rule 40) and Temporary Confinement (DC Rule 42) : introduction of Solitary confinement in Britain’s immigration detention centres, “even if it could kill them”.' have no comments